32 runners, two officials, and several supporters came out to our Inaugural Extinction race to raise some funds for Big Brothers Big Sisters and have a great time.  It was a fantastic event.  We ran 498 miles and raised over 1,300 for a good cause while having a blast.

The heat was brutal this morning, but we pushed through.  @SSMinnow and @Phidippedes would have made it to the end if it wasn’t 90 degrees out there at the finish.  For a completely off-the-books event, the race finished without hitch.  It’s almost like we knew what we were doing, but we all know that’s not actually the case.

@Tumbler and @Oz had the timing system going like a machine.  The crowd was engaged as each group came across the finish line.  The cheering, time calling, and support was an awesome sight to see.

A great event all around.  Proud to be part of F3.  You guys are truly life-changers. 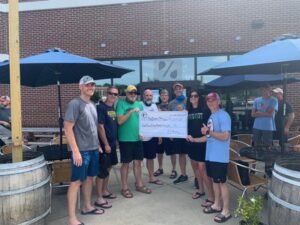 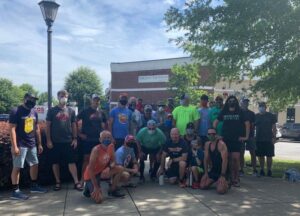 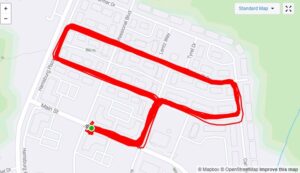 So much good material about the event to try and remember.  Here’s some of them that I can remember.

T-Claps to @SSMinnow and @Phidippedes for making it until 28 miles.  The heat kept getting worse as the day went on.  I’m sure they would have made it if the temps were better.

Thanks again to @Tumbler and @Oz for officiating the race.  Excellent job.

@Scooter had an excellent 3rd place finish.  He could have went another couple, but better to be safe than sorry in that heat.

The key to beating @Wexler at a race is to fake an injury early and race him on a day with Saharan dust cloud aggravating the asthma.

@Clueless had this race figured out.  Each mile after 15 was faster and faster while making it look easy.  Baseball practice got in the way otherwise he would have gone much farther.

@Exit54 may or may not have been referring to @SoloCup when he said we have now “trimmed the fat” and the rest of the guys would be out there for a while after about mile 14.

Cameo appearances in the crowd by @Bull, @Hootie, and @Tbone.  Thanks for coming out guys.  Glad you got to see me.  This race was definitely too hard for you guys.  Keep working and maybe you’ll be ready by next year.

@Constitution and his 2.0 also put in a few miles.  His 10-year-old put in 5 loops, I think within the time for those laps.  Nice work!

PSA: watermelon is the ultimate recovery food and I don’t share.  The more you know …

Huge thanks to Percent Tap House for opening early.  The Taco truck was fantastic!  4 tacos, an ultimate burrito, and 4 beers later and we need to run another 20 miles.  Worth it!

@TarTar was there pimping in his convertible running over the contestants.  He has a beer on tap at Percent Tap House.  Think it was number 30.  It was good, try it out!

Thanks to @Kojak, @Segundo, @Exit54, @SoloCup, @Starsky for all their coordination efforts.