Rain! Rain! Go Away! Who will come out and play!

Rain, rain, go away!  The Q rolled in or rowed in to the HT parking lot for the Tuesday run. The night before the Q had put out a plea to his fellow running PAX to join him on the pre-run so that he may not fall victim to the Othello Vortex. Upon arrival it was soon confirmed that the Q was going to be alone to fight off the vortex. The battle was lost quickly and soon it was just a matter of getting enough oxygen to my brain. Othello was at conversation pace and really had to concentrate to not to leave “Sir Huffs A Lot” (Q) behind. The two returned back to the flag at 5:30 in hopes that another PAX or two would show and low and behold, Gopher was there waiting. The newest PAX to the group was strong enough to fight off the Fartsack and post. The CDC has confirmed that at least two of Mint Hill’s PAX have confirmed cases of the Fartsack virus and there may be a possible third. We ask all to make sure to wash your hands of excuses for at least two minutes under warm water. This will help to keep the spread of the virus to a minimum.

The three took a short mosey over to the ABC parking area for some Beep training. The object is to run (soon as you hear the beep) 60 feet and then run back when the next beep occurs. There are rounds of 10 and each round the beeps are faster. We were able to complete 10 rounds and then finished off with slow mosey around the HT parking lot.

Rain or shine we gather to make each other stronger and to lift each other up and it is always a pleasure to lead this group. Thank goodness that Gopher showed up so that I could refer to it as a group.

announcements – Pour 64 on Saturday February 29 starting at 4:30 p.m. until 10:00 p.m. for M & M and his fund raising event for the Boston marathon. Please keep all of injured in your prayers and hope for a quick recovery 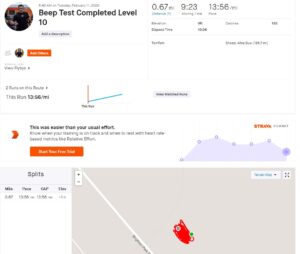