Pox’s Deck of Death…notice to Pax, the deck is stacked

12 hours prior to launch, both Weather Underground and the Weather Channel agreed, at 530AM in the gloom there would be torrential downpours.  As such, YHQ planned for a fully covered under the awning deck of death.  10 stoners arrived (actually 8 arrived ontime) for all the festivities and were treated to exactly no rain for the entire workout.  Anyways, it went something like this:

The thang: Pox’s deck of death, pull a card and perform per instructions; after each Pax pulls one card, take a quick lap around the playground and move to the next set of exercise.  Careful, the deck is stacked.  We got through all rounds and a few extra cards to boot. 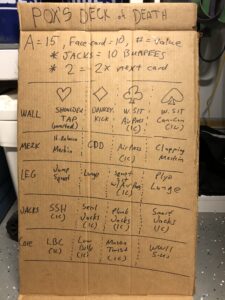 Return to the Hill Redux