Today 4 pax tried out for the DL lake football team in a frigid 18 degrees. It started off poorly with my 1st step being on ice and sliding out of my truck, slamming onto my running boards and rolling across the ground. Luckily it was more comical than serious pain and the workout continued (almost) as planned. I did a serious disclaimer due to the ice and the activities planned.

5 burpee penalty anytime someone was caught walking on the field.

2. Tire or Brick Partner work: X10 each, 2×4’s through the center hole. The DL big tire trucks proved to be unbelievably heavy but manageable.
Overhead Press
Squat
Overhead Side to Side
Squat press

Flag football, Red Vs Yellow, 4 downs to turnover. Blitz pass allowed. At the end of each play there are exercises depending on what happened. 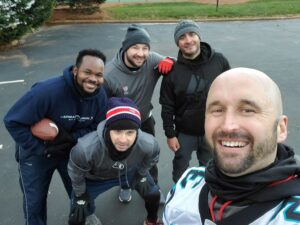 This turned out to be too hazardous with the ice. Poor King Julian took a hard slip and hit hard CLAIMING he was going to catch my hail mary pass to FNG Matlock (who knows if that was true). He’s tough and got up to continue playing but I called an audible. We moseyed back and forth while throwing the ball on the run.