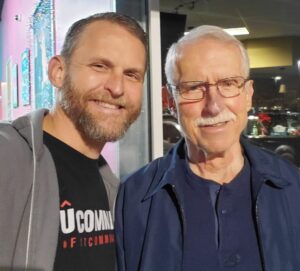 My father, Larry Frederick Zufall, passed into Glory last Tuesday at the age of 79. Parkinson’s Disease and Dementia had ravaged both body and mind for over a decade, but now he is Healed. Before he lost his faculties, Dad was a wicked smart and physically strong man with a great sense of humor. He grew up on a farm near Punxsutawney, PA and later worked as a Customer Engineer and then Manager with IBM. He was the youngest of 4 and had 6 kids of his own, of which I am the youngest. He will be greatly missed, but I take comfort in knowing he is fully healed and that I’ll see him again soon.

Thanks to the 6 men (Powerball, Snape, Hugo, Snowsuit, Shazam, and Disaster) who joined me this morning to honor Dad’s memory, making the PAX total a Perfect 7!