School was cancelled in anticipation of the ice storm of the century on Thursday. Some concern was voiced on Slack the night prior regarding some potential extra gear and YHC tried to ensure a safe haven at RS come 0530. Some HCs followed on Slack and the final count of 6 Pax braved the soggy tundra of WR Odell. None of the HCs in attendance. 0530 hit and we moseyed quick step out of the rain to the safe haven of the posterior entrance. more on that later

Brad Panovich was selling this ice storm hard and all the weather apps had us down for 95% precipitation at go time. Searched the vast annals of F3 Meca Backblasts for a covered type workout. Put the word Deck in the search bar and some interesting results came up. Apparently there are a lot of parking deck BDs throughout the region. As expected Deck of Death came up quite often. What was more surprising was the amount of times Love Seat came up attached to these D of D results. He appears to be the grand poobah  of this methodology, talked some smack on slack the night before regarding the BD, and then promptly Fartsacked. Oh well, we carried on with out him but had a 10 second moment of silence in his honor. . Pretty simple and followed the chart below. 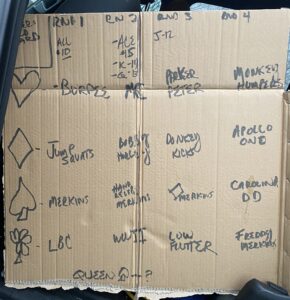 each Pax took a card and had the option to call IC or OYO. about a 50/50 split. After 2 consecutive rounds we took a break for some wall work. Still raining so we skipped the traditional run. Ultimately made it through 6 rounds.