Run to the Hills

After some discussions about potential routes, I decided to take some inspiration from Monday’s Metallica and run to the hills, Iron Maiden style.  (If you’re not sure who that is, I had to google exactly who sang the song too, so don’t worry).  10 men came out too and went along for the ride

From town center, we run to the old post office and set off on our Harris Depot Hill repeats.  1st leg is from the post office up to Oakley and back.  2nd leg goes from the post office, up to Oakley and up Oakley to Pharr Mill Brewery (or the church if you want to use more pious landmarks) and back.  3rd leg is the same as leg 2 but add on the Henderson street.  We then gather up the crew and make out way back to town center, a bit late but everyone made it at least.

It was really nice for some of the speedsters to take the morning off and allow some of us a chance to be the fast ones.  The segments for the hills are up and definitely had some some folks (okay it was just @Flipphone) fired up and sprinting out of the gates.  YHC saved it for leg 2, no course record but I’m at least on the board now.  Not a ton of chatter as it was humid and everyone was busting it up those hills.

Good to have @fig out and to meet @Koozie  Shoutout to @Deadhead too for coming out on one of his few days in town.

I may have pulled what is known as a @flipphone and sprinted across 49 right as our light turned from green to yellow.  Threw caution to the wind since we were already a bit late heading back, glad everyone had enough in the tank to sprint across with me…but seriously the guys ahead of me should have crossed in the first place and not circled around.  You gotta take those green lights across 49 whenever you can get em.

Massive respect to everyone, while it may not be the pitchfork, Harris Depot is no joke and the humidity had everyone sweating buckets.  Even @talladega looked tired, but just barely.

Coffeeteria was something else, we had chess talk, we wondered where T-Bone’s coffee friend went off to, talked some quarantine hockey, how YHC is deceptively fast, which I think is the guys being nice and backhandedly saying I’m fat.  I think it’s just a peak dad bod if I say so myself.  And someone ended the morning looking like this.  Gotta show to know. 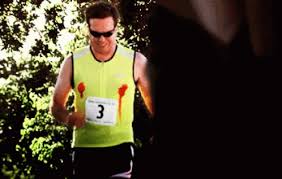 Still need a Q for Saturday, especially if you don’t want to do @flipphone’s cirque du soliel merkins up the library steps.

Also Harrisburg 10k virtual race is being run tomorrow by a few of us.  YHC was informed I might get Nancy Kerriganed.  We’ll let you all figure out who is the Tonya Harding and who is the Jeff Gillooly of this criminal enterprise.