The Valley
No Comments

Another Crown for Landlord

YHC thought he may be the lone runner on a clear morning with temperatures in the mid-40s.  But right at 5:31 AM, Landlord runs by the Tradition AO parking lot and asks YHC if I was ready… Born Ready Landlord.  We set out southward down Prosperity Church Rd at a pace that can best be described as in between moderate and fast, as we have recently been warned of the dangers of moderately paced training sessions. Only variations of Slow and Fast are permissible.  Landlord then proceeded to regale me with his tale of the “Key to Prayer”. It involves a broken car key fob (key less ignition) and Landlord’s daily prayers to God to start his car.  Apparently, his prayers continue to be answered and he has decided not to get the key fob fixed because he is now reminded to be continuously prayerful about the little things throughout the day.  Pretty awesome story.  It should be hitting the shelves as a shorty story in the near future.

Soon after the story, at about 1 mile in (now on Mallard Creek), we are joined by a speedy Sterling who definitely ran in the Fast category to catch up with us.  We then came to the intersection of the Mallard Creek Greenway at Mallard Creek elementary where YHC decided to try for a 2-mile segment ending at Fairlea Drive (Greenway End) that I hadn’t attempted before. Landlord decided to join me in the effort and we took off at what felt like a blistering pace because my butt cheeks were still burning from the Precinct 5-YR Anniversary Lunge Fest the day prior.  We joked during the run that we likely wouldn’t come close to snagging the crown but lo and behold, Landlord took the crown with a time of 14:01 and YHC was 3 seconds behind him at 14:04. The three of us then struggled mightily up Fairlea Hill before heading back to the launch point.

It was great running with you guys. Let’s do it again soon! 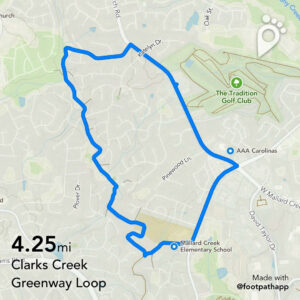